WPN is giving your players what they want, a poker vacation they will never forget 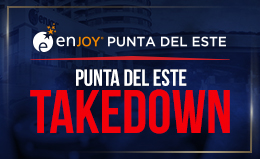 The Winning Poker Network is the king of online promos like the upcoming $10 Million Venom in January and the $25 Million OSS Cub3d series in February. But we also like to mix it up which is why we send players to Vegas to compete in the WSOP and used to also sponsor the Punta Cana Poker Classic.

Our newest live promo is sending 10 players to Uruguay to compete in the Main Event of the Enjoy Poker Series from February 8th to 12th.

The promotion is called the Punta del Este Takedown and it will award those 10 packages via two Main Satellites at 4pm ET on Sunday, January 16th and 23rd.

Here are two extra reasons why you need to get the word out about this promo:

• Players loves these kind of promotions

As much as your players love online poker, there’s something extra special about playing in a big, live tournament in an exotic location. That’s because the action is incredible, both on and off the felt!

• Packages are available starting at $0

While each of the two Main Satellites cost $109 to enter, you can get in for pennies on the dollar or even for free. All you have to do is qualify via this path: Freeroll -> Super Sat -> MEGA Sat to the Main -> Main Satellite

So let everyone know now about the Punta del Este Takedown as it could be one of your players heading to South America!