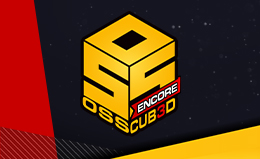 We’ve been getting great feedback from players and affiliates about the $25 Million OSS Cub3d. It ends on August 29th with the completion of the final series, the BOSS.

But before we even get there, we have some great news to report!

We’re keeping the momentum (and affiliate profits!) going with the $20 Million OSS Cub3d Encore series. It will last over three weeks from Sunday, September 4th, which is Labor Day Weekend, to Monday, September 26th.

This is all part of ACR’s 21st Anniversary Celebration that’s running from May to October. Some of the other huge events have been the cheapest $1 Million tourney in our history (only a $109 buy-in). Plus, the Venom which just broke its $10 Million guarantee for the first time.

And we have also have an upcoming Punta Del Este Satellites promo where we’ll be sending 21 of our players to compete in a big Main Event in Uruguay this October.

So, promote the $20 Million OSS Cub3d Encore now and keep those profits red-hot through the end of September!