We’re awarding 20 WSOP Prize Packages valued at $12,500 each through our WSOP Takedown promo 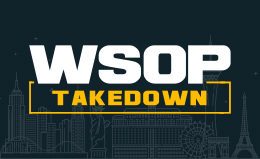 We’re making it simple for players to compete in the biggest poker event on the planet without breaking the bank. Of course, we’re talking about the World Series of Poker Main Event in Las Vegas.

Our WSOP Takedown promo runs September 5th to 19th. In total, we’re awarding 20 Main Event prize packages worth $12,500 each. The Main Event gets underway on November 4th at the Rio All-Suite Hotel & Casino in Sin City.

Not only are there 20 WSOP prize packages up for grabs, but players get to decide if they want to keep the cash or head to Vegas. With $12,500, each winner will have enough money to cover the WSOP Main Event buy-in, plus travel and accommodations, but it’s entirely their call.

The WSOP Takedown promo isn’t just popular with players. Affiliates love it too since it’s an easy way to boost sign-ups and revenue on the back of the world’s biggest poker event.

If you’re looking for world-class profits, tell everyone about all the WSOP prize packages that are up for grabs.