The bell rings for the $5 Million Venom PKO starting Friday, May 13th 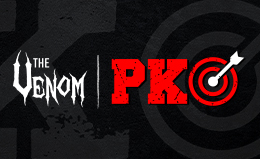 The $5 Million GTD Venom PKO tourney returns to Winning Poker Network sites on Friday, May 13th. And this is the perfect time to punch way to huge profits.

The first big selling point is this is the biggest Progressive Knockout tournament on the planet. And if that doesn’t get players’ attention, the top prize, which is usually around $750,000 with bounties, definitely will!

The Venom PKO has four Day 1 flights (May 13th, 15th 20th, 22nd). It all leads to a final table on Wednesday, May 25th where one player will be the last man (or woman) standing. One recent final table had a single bounty worth $118,000 and there are always many others worth tens of thousands of dollars each.

If you want a reminder of what a PKO tourney is, each player begins with a bounty on their head. When a player knocks out another player, they receive 50% of the target’s bounty. The other half goes on the hunter’s head, so as the tourney runs deep, bounties keep getting bigger.

The $5 Million Venom PKO costs $2,650 to get into, but players can secure a spot for pennies via Skips and Venom Blitz Satellites, or for free through Steps and Freerolls. There are also hundreds of seats up for grabs via Venom Fever satellites (start April 29th), plus a host of Venom Specials.

So, if you think your players want to play in the biggest pots of their life (and why wouldn’t they?!) then get the word out now about the Venom PKO!