See your money (revenue) soar with this breaking news about Chris Moneymaker! 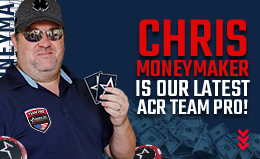 You probably know about our roster of Team Pros at our flagship site, Americas Cardroom. It’s a good group of ambassadors and now we’ve just added one of the biggest names in the poker industry!

That’s right, Chris Moneymaker has just been added as an Americas Cardroom Team Pro. This huge news was announced by Chris himself during the Final Table Live Stream of the $8 Million GTD Venom.

Moneymaker is best known as the winner of the 2003 WSOP Main Event, netting a whopping $2.5 Million. The fact that he won his $10,000 Main Event seat through a low buy-in qualifier sparked a literal boom in the online poker industry, which many have dubbed the “Moneymaker Effect”.

Chris has stayed in the spotlight these last 17 years, upping his live earning to over $3.9 Million. And in 2019, he received the game’s highest honor by being inducted into the Poker Hall of Fame.

You might be impressed by this news but still wondering how it can affect your bottom line. Well, Moneymaker being one of the faces of the brand gives Americas Cardroom even more prestige, which will give your prospective players the confidence to sign up and deposit.

Also, the marketing department is working now on a promotion where your players can become the next Moneymaker, namely winning a huge sum for mere pennies. Full details are coming soon but this will also be a great way to attract players.

For full details on the Moneymaker announcement, click here.