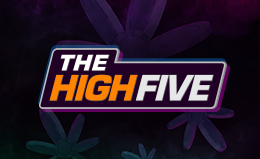 It’s not even the official start of spring yet and our promotions are already red-hot. Actually, make that smoking hot.

Next up on the list is a smaller tournament series ($6 Million GTD) but one that gets way more buzz. Of course, we’re talking about the 420-inspired High Five Tournament Series which is running April 8th to 27th.

This is the promotion with marketing slogans like “grabs your buds” and “smoke the competition”. But what really gets a certain segment of our players going is the daily 10-minute “courtesy break” at 4:20pm ET. This is the time to grab a snack, take a bathroom break, or relax in a far different manner.

The High Five Tournament Series starts Friday, April 8th and runs ‘4 20’ days through the 27th. There are exactly 100 tourneys, which is 5 per day for the 20 days.

So if you want to earn a lot of green this year and take your profits higher, then get the word out now about the $6 Million High Five Tournament Series.