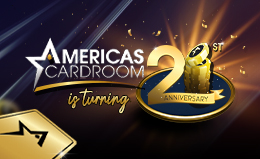 Our flagship brand, Americas Cardroom is turning 21 and we’re celebrating. This milestone is a huge deal because it shows the longevity and stability of the site. And players are drawn to the promo because they can remember when they turned 21 and all the freedoms (legal drinking etc.) that came with it.

This promotion is also unique because it lasts six months (May – October), allowing you to continually engage with players. You can see all the 21st Anniversary items on the promo page but we’re highlighting a few important ones here.

ACR hosts a lot of $1 Million GTD tourneys over the course of the year, like the Million Dollar Sunday which runs almost every week. But while that comes with a $215 buy-in, this $1 Million GTD event in July has just a $109 cost.

There will be multiple package giveaways to a Uruguay live event in October. There will also be a massive party there for ACR players. All our previous land-based promos (Uruguay, Texas, Las Vegas) this year have been very popular and this will surely continue the trend.

Interact with the CEO and Team Pro

There will also be surprise heads-up challenges vs. Phil Nagy and some ACR Team Pros. This will allow players to interact with the CEO as well as some of the entertaining Pros. This really helps players feel connected with the brand.

Surprise tourney in September or October

This will be another big prize pool with a small buy-in, with the numbers still to be determined. The key selling point here is ACR is looking to break our record for the most players in one tournament.