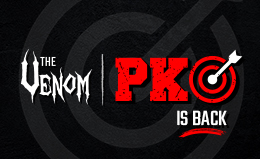 The $5 Million GTD Venom PKO tourney returns to Winning Poker Network sites for the third time on Friday, September 17th. Players love our Progressive Knock Out tournaments, so this is a massive opportunity for affiliates to profit.

Don’t believe us? Check out our last $5 Million Venom PKO this past May. It featured $7,160,000 in prize money, thanks to overwhelming demand. And with that kind of cash on the table for our players, you can be sure that affiliates shared in the revenue.

Once again, the Venom PKO has four Day 1 flights in all (September 17th, 19th, 24th, and 26th). It all leads to a final table on Wednesday, September 29th where one player will be crowned champion and many more along the way will win an obscene amount of bounty money.

Not familiar with the Venom PKO? In this Progressive Knockout tournament, each player begins with a bounty on their head. When a player takes down another player, they receive 50% of the target’s bounty. The remaining half goes on the hunter’s head. This means that as players run deeper, their bounties get increasingly larger. In the last Venom PKO, winner ‘Rydo’ earned $477,815 in regular prize money plus $273,253 more in bounties!

The Venom PKO direct buy-in is $2,650, but the tournament isn’t just for high rollers. Players can get a seat for next to nothing by taking advantage of Skips and Venom Blitz Satellites. We’re also running Freerolls and Steps starting at $0. And don’t forget about the hundreds of seats up for grabs through Venom Fever starting September 3rd.

Get the word out now and watch your sign-ups and conversions soar.