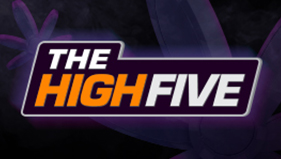 Our 420-inspired High Five Tournament Series is one of our core promotions. It has run at least once a year for several years now.

There’s a reason that we keep bringing back the High Five and it’s because players love it. The series might not have the level of guarantees as our OSS Cub3d (the most recent was $13 Million), but that doesn’t make it any less popular.

This High Five Tournament Series will run from April 7th to 26th. There will be five tourneys a day over those 20 days (100 total) and $10 Million in guaranteed prize pools.

Why should you promote the High Five? Besides the obvious $10 Million in cash up for grabs, there’s some really good selling points for your players.

Puns, Puns and more Puns: The marketing communication for this promo is filled with slogans like “grabs your buds” and “blaze the competition”. While these puns clearly grab players’ attention, they are not over the top. Another item that differentiates this series is the daily 10-minute “courtesy break” at 4:20pm ET.

Three $840,000 Main Events: Every Sunday (April 12th, 19th, 26th) during the High Five is a $840,000 Main Event. That means there is something big for players to look forward to each week. Players can buy-in directly or qualify for pennies on the dollar via satellite.

Extended format here to stay: When we first started running the High Five, it was just 5 days long and a little over $1 Million in guarantees. In our most recent version in September 2019 we bumped up the days to 20 (and the guarantees to $10 Million) and got a great response from players. Expect to see this new longer format going forward.

Don’t delay another second! Get all the marketing materials in the backend now and start promoting the $10 Million High Five.