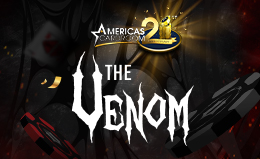 It’s been a huge last few weeks here at the Winning Poker Network. Our flagship brand, Americas Cardroom, is celebrating its 21st Anniversary and it has brought our network tons of attention across the poker world.

One of the anniversary promos is the return of our Venom. This tourney will be held at all WPN brands and will have a $10 Million guarantee for the third time ever. And while that $10 Million figure is massive, we truly believe that all our recent buzz will mean we’ll set a record for the most Venom players ever.

The $10 Million Venom starts on Thursday, July 21st. And with four Day 1 options, your players will find the time to play no matter where they live worldwide. Day 2 will be on Monday, August 1st, Day 3 on Tuesday, August 2nd and then the exciting final table on Wednesday, August 3rd.

The Venom costs $2,650 to get into, but there are many ways for your players to get their seat for far less. We’re talking just pennies through Venom Blitz Satellites and Skips, or even free via Steps and Freerolls. There are also hundreds of seats available for pennies on the dollar through Venom Fever satellites.

Get the word out now about the $10 Million Venom and watch your signups and profits go to record levels!